However, there is a concern that the proximity to roads will result in contamination of the material to such an extent that these products may not be within the legal limit for heavy metals and/or polycyclic aromatic hydrocarbons (PAHs). We examined the concentration of several heavy metals PAHs in UK road verge material to determine whether we should be concerned about contaminated material getting into the supply chain. For this reason, UK legislation classes road verge cuttings as waste material.

Polycyclic aromatic hydrocarbons (PAHs) are common organic pollutants. Among the 16 US Environmental Protection Agency priority PAHs, 7 compounds have been classified as probable human carcinogens. In urban areas, vehicles are one of the most important local sources. Much of this is from diesel and leaded or unleaded gasoline, but asphalt and tyres are also PAH sources. Even in remote areas, studies have shown that PAHs tend to increase with proximity to roads.

Heavy metals (HMs) are any metals that have densities that are greater than 5 g/cm3. Their concentrations can be considerably more than in natural conditions due to anthropogenic activities, such as industrial activity, agriculture, pharmaceuticals and domestic effluents. Vehicles are also a heavy metal source, from brake linings, tyres and exhaust fumes. Several acute and chronic toxic effects of heavy metals including gastrointestinal and kidney dysfunction, nervous system disorders, skin lesions, immune system dysfunction, birth defects and cancers. As with PAHS, the concentration of HMs will increase with proximity to the road. Importantly, heavy metals do not undergo microbial or chemical degradation and therefore can exist in the environment over long timescales.

Canterbury Christ Church University have carried out research examining the concentration of heavy metals and PAHs in soil and plant material from 9 road verges in Kent. The study also compared heavy metal concentrations at the road verge sites to 9 nature reserves and 8 arable farms in Kent to understand if the concentration is similar to that found in edible crops and whether road verges had significantly higher concentrations of heavy metals than natural grasslands such as nature reserves. The heavy metal analysis results have been compared to the PAS 100 and PAS 110 Environment Agency Waste Resources Action Programme legal limits (2010), the UK rural herbage averages from a 2007 report and a 2013 UK Environment Agency report on contaminants in street sweepings (one of the few studies on contamination of road verge material in the UK).

The average concentration of arsenic, cadmium, zinc, mercury, manganese and selenium was below the UK herbage average. Unsurprisingly, copper, lead and zinc – three heavy metals known to be associated with roadside pollution – were above the UK rural herbage average though. Interestingly, the average concentration of zinc, cadmium and manganese was higher in the nature reserve material than the road verge vegetation. The average concentrations of the heavy metals were well below the concentrations reported for street sweepings and the PAS 100 and PAS 110 limits for all metals covered in the guidelines (copper was , zinc, lead, nickel, cadmium, mercury and chromium). This suggests that the verge material is suitable for both composting (PAS 100) and that is can be used in anaerobic digestion plants to produce energy from waste (PAS 110). Finally, the average concentrations found in this study were considerably lower than the data from the roadside sweepings study, suggesting that we may have overestimated the level of contamination in road verge material. 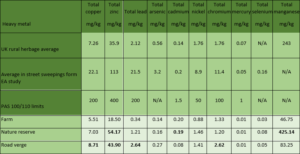