We created a list of over 200 plants found in UK grasslands and marginal land such as road verges. We then compiled a database of plant attributes specific to each species, and a scoring system to quantify these attributes. The categories used in the database included aesthetics, whether plants were edible for humans/livestock, whether they were known to be toxic to humans/livestock, the medicinal/social/economic/ecological uses, associations with pollinators, abundance, invasiveness, competitive nature and whether plants were host of pests or disease.

The plant is scored over the categories, where each category has a different range for the potential score depending on the importance/severity. For example, aesthetics scored could range from 0-2, where a score of 0 would indicate no flowers or an ordinary grass, 0.5 might be used for an interesting grass, 1 would be used if there were colourful flowers and/or the plant was generally appreciated and 2 would suggest the plant species was particularly important to people (e.g. orchids). As the aesthetics category was subjective, we undertook a large-scale survey to ascertain people’s views on the aesthetic value of the plant species being scored. Each participant was given 12 images of individual plants and asked to score each out of ten for how visually appealing they thought the plant was. There were no significant differences on the scores based on the flower colour, size or shape of the flower, but the plants with flowers tended to score higher than grasses without flowers. Other scores had higher ranges, such as usefulness for pollinators, with scores ranging from 0-4 (0 = wind- or self-pollinated; 1 = used by 1-2 pollinators but no evidence of good pollen/nectar quality available; 2 = used by 2+ pollinators, or used by 1 pollinator but  2 or more references found for pollen/nectar quality of the plant; 4 =  various pollinators rely on the plant and evidence of good pollen/nectar quality). Using these values for each category, the total score for all the negative categories (invasive, competitive, host of pests and diseases, toxic to livestock, toxic to humans, native/non-native) is subtracted from the total for all the positive categories (aesthetics, edible human, edible livestock, medicinal uses, social uses, ecological uses, economic uses, usefulness to pollinators) to give an overall usefulness score.

This database and scoring system will be useful to indicate plant communities’ functions and attributes at a given roadside verge and to inform targeted management conversations around marginal and roadside land. The pollinator category has been written up as a separate paper and will soon be submitted. We are currently expanding the database to include other attributes that were suggested at a recent Grassification conference, including carbon sequestration, quality for downstream feedstock (performance and fibre/glucose content), local provenance, height (suitability for low cut edges) and fungal associations.

Our system is designed to complement existing systems to provide many useable data in one place. Additionally, the database will be useful to ecologists, students, and the wider community to easily access plant attributes and associated data. We will look for funding to turn the database into a GUI online or app system that is easily available for the public. We are also going to make the scoring system data available as a grassland flora identification book that displays some of the most interesting points about each plant, their contribution to biodiversity and ecosystem services and the score they are given as overall usefulness across the attributes. The book will include approximately 150 grass and non-grass species with illustrations and photographs of the plants. We hope the book will be with a publisher in the New Year. Two draft species examples are shown. 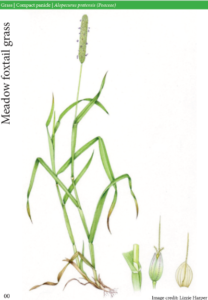 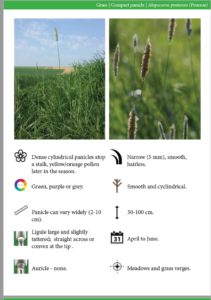 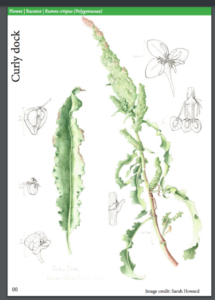 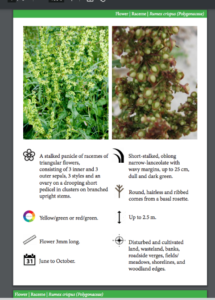 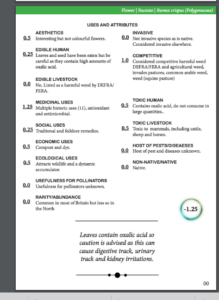 As part of our investigation into roadside verge biodiversity we have looked above ground at the plant and pollinator diversity and below ground at nematodes, protists and fungi. We have some exciting data on fungi that we are currently analysing and are working towards a similar system of fungal functions and associations in the context of roadside verges and we hope this paper will be out in the New Year.

We have enjoyed working on road verges as part of Grassification and have nurtured some great collaborations. Best wishes to everyone and thanks for the opportunity to work on such an important set of projects.