OLEAF4VALUE first in-person General Assembly, after two first online versions due to the Covid-19 pandemic, was attended by a total of 11 partners from different countries within the European Union, the rest of partners attended the meeting online. 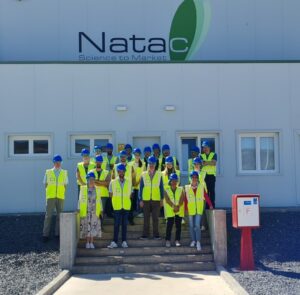 The first meetings, held on the first day of General Assembly, focused on reviewing the work done in the WPs. On the second day, two discussion tables were organized, where partners could sit down to discuss different aspects of their developments. The second day was also accompanied by the organization of a workshop by the partner INNORENEW, where they presented the mathematical application, they were developing in the framework of the project. The day concluded with a scheduled visit to Hervás, where the mayoress of the town accompanied the project members on a tour of the town.

On the last day of the General Assembly, a visit to Natac’s factory in Hervás was organised. There, the members were able to learn first-hand about Natac’s work in the extraction of botanical compounds, including from olive leaves. The factory has 21,000 m2, in which the first phase of the factory has more than 6,500 m2 of production area, offices and warehouse. It involves a multiproduct center in which various extraction technologies are combined, with state-of-the-art equipment and machinery with an estimated annual processing capacity of 3,000 tons of raw material.

This first in-person GA was a great success, bringing together almost all the project partners in a unique natural environment, and being able to discuss the progress of the project, as well as to find solutions to the challenges to come.