Completion of PIGergy: A novel means of unleashing the energy potential

GlasPort Bio’s innovative technology, GasAbate, which tackles agricultural emissions at source, was awarded the prestigious ERA Net SES funding award in 2019 to conduct research into the reduction of greenhouse gas emissions from pig manure. This 30-month project focused on the pig sector in Ireland and Italy which are home to 1.68 and 8.54 million pigs respectively (Eurostat 2020 figures). A wider EU focus is also considered, where there are 146 million pigs (Eurostat 2020 figures) – the largest livestock category of the region. The pig sector is the biggest contributor to global meat production, with global demand forecast to grow by 32% by 2030. It is a sector which generates significant quantities of waste requiring storage and processing which produce 27% of the 0.7 gigatons CO2-eq. that the pig sector contributes to global GHG emissions each year. If industrial GHG emissions are not reduced, the forecasted production increases will lead to even higher emissions.

PIGergy was a collaborative project between GlasPort Bio (Ireland), a company who has developed an effective additive for animal manures for gaseous emission reductions and an Italian engineering company, KiRa Tech. (Italy) who bring a micro-CHP to the project. PIGergy addressed both challenges of reducing emissions while increasing renewable energy production. This project presents a sustainable closed-loop treatment system of animal waste (manure and slurry) to allow for reduced GHG emissions and increased energy output (see accompanying schematic). 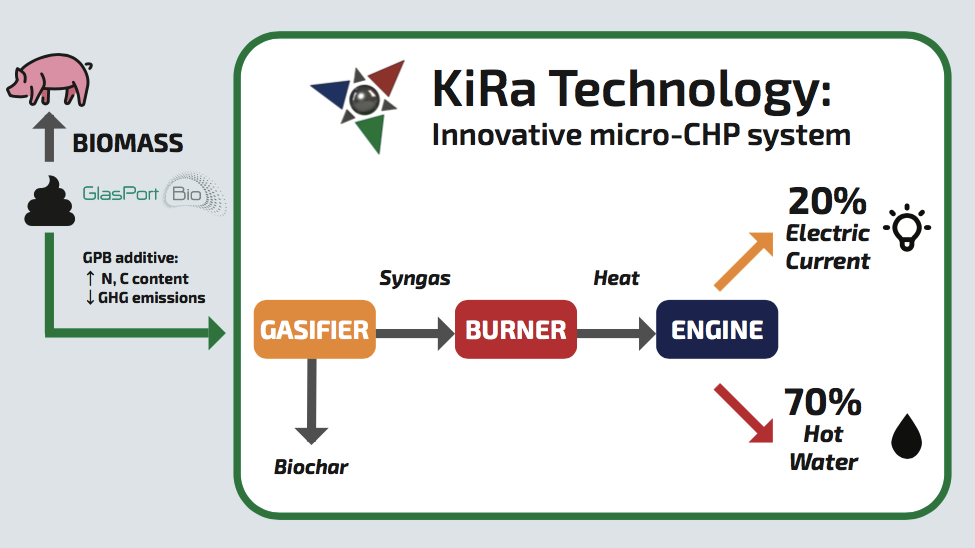 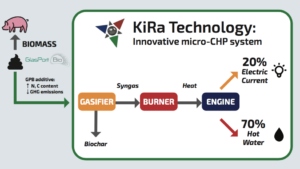 GPB-treated pig manure is used as a pelletised feedstock for combined heat, power (CHP) and biochar production. This solution is targeted towards small-scale pig producers of <100 pigs on-site in order for them to use their manure as an on-site energy feedstock, generating a closed-loop solution for the agricultural community.

The ERA Net SES funded project facilitating laboratory-scale through to demonstration-scale testing at an Irish pig producer facility, allowing the project team to demonstrate gaseous removal efficiencies of up to 96% for methane on fresh pig manure. The dried, pelletised pig manure was then used as energy feedstock in the KiRa technology FAPE micro-CHP generating higher yields than untreated pig manure. Modelling for EU pig farms show that this solution is a viable option for small-scale pig farmers, with a payback of 2.3 years. 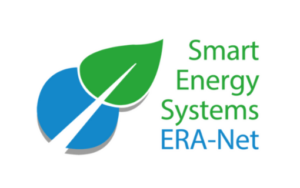