The utilisation and development of environmentally friendly technologies are key factors for the achievement of the ambitious aims of the EU to increase the share of renewable energies. The energetic utilisation of biomass has an important role, as in contrast to other renewables (wind/PV), biomass is storable and it is possible to produce storable bio-fuels.
However, at present the energy production from biomass is often economically inefficient, e.g. through an insufficient utilization of waste heat in conventional biogas plants. The conventional production of biomass for biogas plants is often eco-inefficient, e.g. due to the dominance of maize and the increased risk of soil erosion and nutrient losses. The competition with food production on fertile land and the resulting increase of prices for land and agricultural products causes ethical and socio-economic problems.
Hence COMBINE aims at opening up of abandoned urban, natural and agricultural areas for the energy production.

In the 4 partner regions the COMBINE project strived for this by: 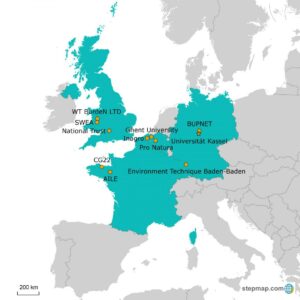